Today I wanted to write about a different kind of high volume training. After I finished grad school, I was looking to go in another direction (I used to teach high school math and science) and was seriously considering going to law school. I took the LSAT and began talking to other folks about becoming a lawyer. A lot of people advised me to take on a job as a public defender after I passed the bar so I could fast-forward my experience. They said, “Take on a job as a public defender and you’ll learn more in three years than you would in ten years of taking a job with a regular firm.” This is due to the fact that as a public defender you’d have so many cases thrown at you that it would expose you to incredible amounts of volume and variety.

Obviously, I never went to law school and instead decided to try my hand in the business world (after reading eMyth and Cashflow Quadrant) by opening up my own personal training studio, which I called Lifts. When I opened up, I could have chosen to train one-on-one and charged hefty fees since my facility was in Gainey Ranch in Scottsdale. However, I decided that what was best for my career would be to do group training, charge lower, affordable rates, and train several individuals at a time. Every client had their own routine and every night I’d stay up writing the following day’s workout. I never created “annual plans,” “monthly plans,” “weekly plans,” or used any type of periodization scheme. Every workout was written the night before based on what I saw in their previous workout. This is the essence of cybernetic periodization, auto-regulation, and biofeedback and is the ultimate way to train based on my experience. Although the goal was to keep doing variations of the big lifts, keep moving better, keep getting stronger, and keep getting more conditioned, we always left room to adapt and tinker with the workout based on client feedback as well.

Three months after opening up, I had 55 clients (which was actually our all-time highest). I hired two trainers to help out and together we’d train all the clients. Some times we’d only have one or two clients at Lifts, some hours we’d actually have no clients, and some hours we’d have many clients. Usually from the hours of noon to one, five to six, and six to seven o’clock we’d have anywhere between three and seven clients. I opened up on Saturday for two hours each week and one time we had twelve people show up during the same hour. I want to emphasize that this was not boot-camp style training. Everyone had their own workout. The trainers and I would stay for two hours writing workouts for the following day each night and took program design very seriously. I attribute much of my client’s success to this strategy. Here we are posing for a picture featured in Lifts’ first newsletter. 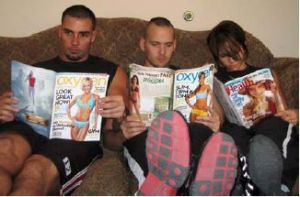 We would still manage to coach, motivate, and spot all the big lifts like squats, bench press, and deadlifts. We got all of our clients extremely fit and strong (I may be biased but I’ve never seen the type of results we got at Lifts duplicated here locally), and we didn’t have any “systematic training” where everyone did the same thing.

This was one of the best things I could ever have done for my career. In just a few years I believe that I trained around three to four hundred clients. I trained big clients, small clients, tall clients, short clients, athletic clients, unfit beginners, men, women, old, and young. I trained several 300-plus pound women (one of my favorite Lifts stories was when a 350 lb African-American female client, upon doing a set of ten bodyweight hip thrusts off the Skorcher, said, “Oh Lawdy, we goin’ into unchawted territory; we workin’ muscles ain’t neva been worked befo!”), some 120 pound men, several sub-10 yr old kids, plenty of 60-plus year olds, a couple of six-foot-six plus guys, several five foot tall women, people who were incredibly strong and gifted athletically, and people who couldn’t yet do a bodyweight high box squat and could barely step up onto a six inch step. You tend to figure out progression and regression schemes very quickly when exposed to this much variety.

Looking back, this was one of the best decisions I ever made. It fast-forwarded my learning and experience, it exposed me to a ton of variety, it gave me experience with one-on-one training, small group training, and even larger group training. It allowed me to learn how to improve fundamental movement patterns (without ever knowing or using the FMS). It allowed me to learn the differences of training people with unique anthropometries and physiologies. It allowed me to master program design skills. It led to innovation. And it greatly influenced me and helped me become the trainer I am today.

If you are an up-and-coming personal trainer, please consider going with the “high-volume approach” and doing group training. You’ll get much more experience and gain much more knowledge by going this route. This is one of the reasons why strength coaches get so good at coaching; high volume. However, strength coaches on average deal with much more athletic people and don’t have much experience dealing with the seriously unfit population (but they deal with rehab situations). At any rate, I hope this blogpost gives some of my younger readers something to consider.

Good Reads for the Week

Good Reads for the Week