Recently, some online discussion about the safety of heavy hip thrusts has emerged, and I want to lay the gauntlet down.

It should not be done in spinal hyperextension or anterior pelvic tilt. When working up to a 1RM or pushing a set to failure, you should stop as soon as you start to lose the ability to maintain proper spinal and pelvic position. You should look like this when you’re at the top of a hip thrust: 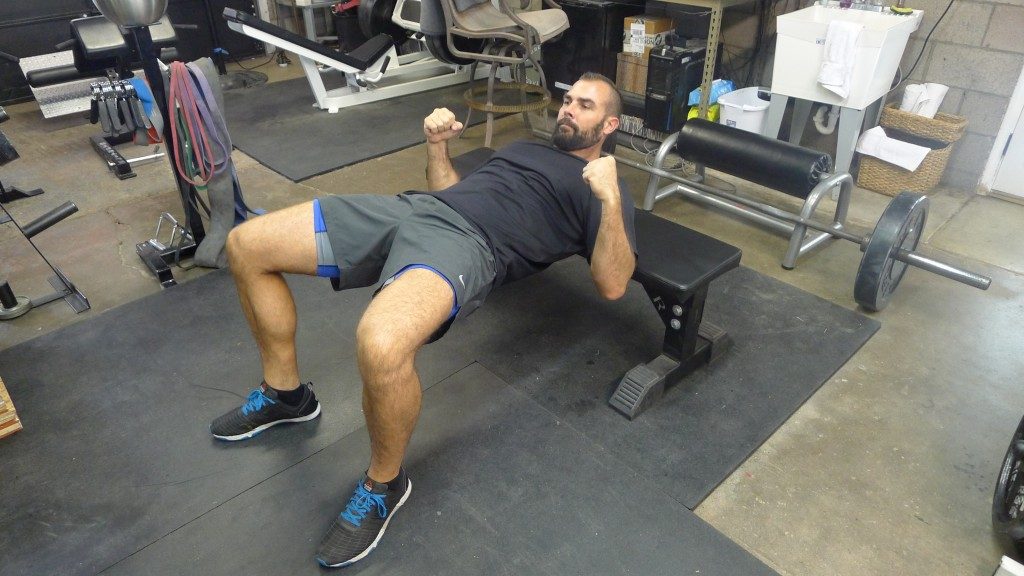 Note the positioning: forward eye gaze, chin tuck, ribs down, level torso, and slight posterior pelvic tilt. You can do this with heavy load, too – you just have to be disciplined and aware.

Please watch this video for visual demonstration and elaboration:

I’ve seen these types of arguments with the squat, deadlift, and now the hip thrust. As strength coach Dan John once said about the squat,

“Squats don’t hurt your knees; whatever you are doing there hurts your knees.”

You must learn to lift properly in order to stay safe.

Improper squats are highly dangerous. Many people experience wrist, elbow, arm, shoulder, low back, hip, and knee pain when they squat. But when they alter their set up, lighten the load, fine-tune their mechanics, and learn to squat properly for their bodies, they find that they’re able to squat pain- and discomfort-free.

Improper deadlifts are highly dangerous. Many individuals experience nagging back pain when deadlifting, but when they learn to hinge at the hips and keep their spines in neutral, they find that they’re able to pull pain- and injury-free.

There are terrifying squat, deadlift, bench press, and Olympic weightlifting videos online (Google “weight lifting fails compilation” if you want a scare, but I don’t like fear mongering), but this doesn’t admonish the exercises altogether.

An exercise is judged by how it’s supposed to be performed, not how it’s commonly screwed up by lifters who prioritize their egos above proper mechanics.

Hip thrusts in general are very safe, but they’re especially safe when you do them the way I teach you in the video above. Strength coach Ben Bruno noted this too when he began teaching the forward eye gaze cue.

In 10 years of personal training, I haven’t had a single client injure themselves with hip thrusts. We hit all the rep ranges and often go very heavy. Five years ago, one client experienced low back discomfort, which caused me to think up the American hip thrust on the spot. Last year, a client experienced hip and low back discomfort, so we switched to band and high rep barbell hip thrusts for a few weeks and the issue cleared up. I also experienced knee pain last year from hip thrusts performed 3X/week, but I dialed back the frequency and the issue quickly went away.

But again, you gotta do it right.

I hope you enjoy the video.