Today’s Guestpost is from my friend Kellie Davis. Kellie maintains a blog at http://www.motherfitness.com

When we moved to Houston a few months ago one of my first purchases was a zoo membership. Most of our summer travel budget was gobbled up by the drive out to Texas, so I tried to keep up with as many weekly activities as I could with my kids.

At the zoo we discovered a place called the Swap Shop. It has to be one of the coolest stores I’ve ever seen. The store encourages children to find things in nature and save them up. Each time they come in, they trade in their things for points, making it possible to trade up for bigger and better items.

Last weekend we arrived armed with bug carcasses, pecans from the trees that line our street, minerals brought across state lines from Tombstone, and heaven only knows what else. As the store clerk added up their points, my kids scampered around the room peering in baskets and smudging up glass cases in search of a new treasure.

I stood with my eyes fixated on a bizarre scorpion when my son grabbed my arm, tugging me toward a shelf in the middle of the room. “Mom, I found what I want. It’s only 75 points.” He dragged me by the wrist to his prize. 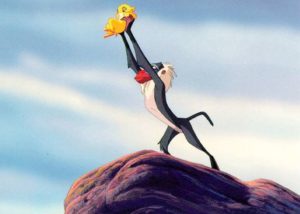 I looked on each shelf in front of me, seeing nothing I really wanted in or near my house. He then turned around—and like Rafiki revealing newborn Simba to the lions of Pride Land—he raised to my eyeballs what I felt to be the most impractical item in the store. “A cattle femur. Really?” I shuddered. “That’s what you want?”

I imagined that on some agriculturally zoned plot of land this poor creature fell ill, dying alone under a tree. His body picked apart and decayed down to bone; his femur carried off by a vulture, dropped, and left to bleach in the sun for what must have been years.

I pan the room, squinting at baskets filled with polished minerals, pristine seashells, petrified wood pieces, and dozens of other nice things that wouldn’t raise the eyebrows of houseguests. I then found my hands unconsciously wrestling the cow leg away from my heart-broken son.

After much coaxing, he settled for slivers of turquoise and abalone, which were likely stuffed into his pocket, forgotten hours later, and now lay to rest inside the crevices of my washing machine.

Within minutes he was completely over the cow bone and enthralled with his trade.

This experience reminded me of when I first got back into fitness. I would pile all my fitness magazines together, creating a Mrs. Potato Head-like self-image.

Prize for what, I don’t know? Perhaps the most unusual limb-transplant case in history?

Don’t get me wrong. It’s good to have desires, goals, and visions of how you want to look. But, like a cattle femur on a bookshelf in my house, sometimes our visions, or desires are a little impractical.

This scenario happens quite often:

An enthusiastic gym-goer brings in a magazine to one of the trainers at the gym. She sets the magazine on the counter, turning to the page with a fluorescent sticky note peeking out from the top. She then reveals a photo of (insert favorite actress/singer/model) and says to this trainer, “Make me look like her.”

What should happen next is he books her for pre-op and then proceeds to put on his scrubs in preparation for surgery. Since not all trainers are cosmetic surgeons (and not all cosmetic surgeons are trainers, which will be on the SAT) he ends up making a hyperbolic promise he can’t keep just so she will show up to her next session.

Or, if he is not the best bull-shitter in the world he says something like, “I can get you close to that, but you have to buckle-down, do everything I say, and give it your all.”

As the months go by, she turns her walk-in closet into a shrine of this image. Every magazine cover is ripped off and plastered to the wall. It’s an obsession that grows worse by the day because she isn’t even close to her goal.

Soon she blurts out an inexpugnable “F*** IT!!!”— dumps Trainer Tad via text message for Ben and Jerry (and weekend rendezvous with Auntie Anne), burns all items resembling butt-lifting yoga pants, forever slipping into sweatpants with CUTE painted across the seat. 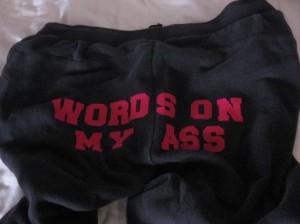 The Trickery of Happy

Why is it we work so hard to reach impossible goals? Isn’t it more practical to strive for something easily attainable? For instance, looking like a sexier version of us? Or you? I wasn’t sure how to phrase that last line.

Dan Gilbert, a Harvard psychologist and the author of “Stumbling on Happiness,” says our belief about what makes up happier is often wrong. During his Ted Talk on the science of happiness, he said that we have what can be referred to as a “psychological immune system,” or a “system of largely non-conscious processes that help [us] change [our] views of the world, so that [we] can feel better about the worlds in which [we] find ourselves.”

It’s like vitamin C for our feelings. To prove his point, he compiled data on two groups of people: those who won an excess of 300 million dollars in the lottery and those who recently became paraplegic.

Our immediate thoughts lead us to believe that the lottery winners are instantly happier people. But statistics showed that within a year from either incident, both groups were equally happy with their lives.

Field and lab studies on the subject are revealing rather shocking things about happiness. In fact, Gilbert reports a recent study showing that a majority of life traumas (with few exceptions) have little impact on happiness 3 months down the road.

So what does this have to do with wanting a body like Lindsay Messina?!?! 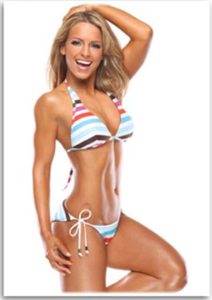 I’m getting there. Be patient.

Think about the last time you had to interview for a job. Perhaps it was recently or it was way back when you had to physically hand-deliver your résumé to a potential employer.

You think the interview went great. You arrive home to report to your spouse, your mom, your best friend, the mailman that this job was carved out of stone to fit you. It’s in the bag. No better candidate exists. You plan your new life around this job and go imaginary new car shopping with your imaginary new paycheck.

Then you don’t get the job.

You feel down about it, but decide that it’s for the best. “It wasn’t the right fit,” you explain to your spouse, your mom, your best friend, and the mailman.

You get a different job and think that it is truly the right fit. You’re happy with it, completely forgetting about the perceived happiness that the other job would have provided. This is what Gilbert refers to as synthetic happiness. A happiness born inside the mind because we feel more secure in the actual world we live in than in a world of false expectations.

Honestly, you wouldn’t be any happier having Lindsay’s body, or any other magazine body than you would with the body you work so hard to achieve. Like the job you didn’t get or the cow leg that isn’t on your bookshelf, that magazine body offered a skewed perception of happiness.

Happiness isn’t something you earn; it’s something you create. It’s synthesized inside that incredible pre-frontal cortex part of your brain. You have the ability to create your own happiness and satisfaction with what is truly yours.

The only thing standing between what you think will make you happy and what actually makes you happy is your own misconceptions. 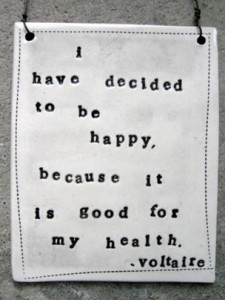 Rather than working really hard at being disappointed with yourself, try creating happiness from what you have been given and what you are capable of doing.

Train not with the goal to look like someone else, but to enhance what you already have. Train, not to be the strongest deadlifter or bench presser, but to be stronger than you are now.

Eat because feeling well nourished brings greater happiness than starving yourself thin. Know that each day when you wake, your body may not always look like it did the day before. Your body is filled with very complex systems made up of organs and tissue and fluid and synapses (amongst other things). Stop trying to control and manipulate them all because it’s making you miserable.

Instead, focus on that synthetic happiness. That thought in your mind that tells you, “I’m good with what I have and what I have potential to do.”

Don’t shroud yourself in disappointment because you can’t look like that girl.

Unveil the happiness of being better at being you.

What I learned from my son’s experience at the Swap Shop was that the end result didn’t bring him the most happiness. The joy he felt wasn’t relative to whether he brought home the cattle femur or a couple of shiny stones. The experience of finding the initial items, trading them up, and searching for something different became his true happiness.