Enough With the Coaching Cues! (But Here are Some of My Favorites)

Today’s article is a guest-blog from Derrick Blanton. Derrick is a big thinker and I love learning about his thought-process. It’s very important for coaches to understand that many of our clients don’t process the cues the way that we intend them to. Here are some of Derrick’s thoughts pertaining to coaching cues.

Enough With the Coaching Cues! (But Here are Some of My Favorites)
By Derrick Blanton

Lately I’ve noticed that the times, they are a changin’. Perhaps fueled by the emergence of Crossfit, as well as the growing internet strength training community, untrained civilians are getting off the treadmill, and wandering over to the weight room. This is a good thing!

Many will be seeking knowledgeable instruction on proper techniques of the various strength training movements. These unsuspecting folks are about to enter the Twilight Zone of well-intentioned coaching cues. And after many years of lifting stuff, and pondering countless versions of these cues, I have come to the conclusion that we should ditch them altogether.

I kid because I love, yet consider a few reasons why coaching cues can be a double edged sword:

The upshot is that cueing is an imperfect, but necessary, learning methodology, so let’s try to get better at it by using an individualized, case by case approach. Along those lines, I’d like to hand out a few “Cueys”, a prestigious, and utterly made up award, to a few of the concepts, cues, and methods that have helped me personally learn and groove effective movement patterns.

Please keep in mind that your list of “Cueys” will likely be totally different, and therein lies the point: These helpful cues are specific to my personal movement process. Which is why they will totally suck…for somebody reading this.

Some of you may remember my lengthy account of trying to learn to “pack my shoulders”. That painful and futile process culminated in two wrecked shoulders, and me giving the cue a retirement party with a one way ticket to Nowhere.

A nice outcome of that article was that it generated some very insightful discussion on scapular stability, and I learned a lot while considering various ideas on the matter. One of those with a different point of view than mine was RKC instructor Brett Jones.

Brett is a super smart, thoughtful guy, and came up with another way to describe this process of “shoulder packing”. He called it a “sticky scapula”. I thought that was pretty brilliant. A “sticky scapula”? Yes, I see it more clearly now! Now here is a concept that I can wrap my mind around. Thus began my “sticky scapula” experiment.

Great hammer of Zeus, it works!

See how fickle this cueing game is? Merely replace the word “packed”, with the word “sticky”, and instantly unlock the inscrutable mystery of overhead movement. It all starts to come together. The scap is sticky, (i.e. moving under tight CNS muscular control); it is not stuck (isometrically packed).

It is nothing more than imagery, and it works.

So now, in some kind of weird synergy, I perform my overhead lifts with an “active shoulder” AND a “sticky

scapula”! I know, I know. This is crazy talk. Cats and dogs playing together. Thank you, Mark Rippetoe, and thank you, Brett Jones! Between the two of you, I am now bulletproof. 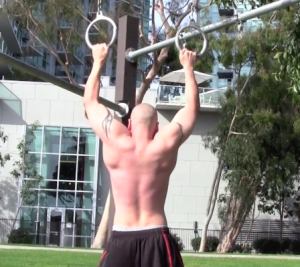 “Pardon me, sir, but are you aware that your left scapula is in danger of losing its stickiness?”

Incidentally, how do we feel about this possible hybrid cue: “active sticky scapula”? Anyone? Mmmkay. Let’s move on.

The Shoulder, Pt. 2: The Bench Press

“Break the bar.” Aaaaghhh!! Excuse me while I go throw a dumbbell on my foot. I am so not a fan of this one, even as I understand that this cue is very popular and useful for others.

You ever try to break a stick or a branch? As you valiantly strain to tear the stick in two, do not your elbows MOVE? Do they not move far inwards of the stick as you apply the force? Can we agree when holding a large amount of weight over your neck and face, that all things being equal, we would prefer to have our elbows stably under the bar, and not actively twisting somewhere down around your navel in some misguided attempt to bend a barbell in two?

What we are really trying to do is create an externally rotating torque (essentially isometric) at the shoulder to counter the internally rotating pecs and lats, right? And this is happening while you are concurrently driving the weight up directly through the elbows.

We need an isometric muscular action, but we are cueing a concentric action.

Enter the evil Russian, Pavel Tsatsouline with his bullet analogy. The bullet spirals out of the chamber; this increases its velocity. This is analogous to the force emerging from the torqued shoulder socket. Note that the bullet doesn’t go floating around trying to bend steel as it spirals out of the barrel. It aims straight ahead.

Consider that this is not even really a cue, but rather an idea, a comparison, an understanding. And this spiral idea fits nicely with my other favorite cue: “Push yourself through the bench”. For some reason, visualizing an open chain movement as a closed chain movement enhances stability, and thus expression of force. The body “gets it”.

Co-Winners: Pavel’s bullet analogy
“Push Yourself through the Bench”, Anonymous

Next Category: The Olympic Squat and Front Squat

Ah, my eternal nemesis, the squat.

When I first started learning the squat, I had a dreadful case of patellar tendinosis. I actually didn’t walk without pain for over a year. At that time, the only SQ that I could perform without crumbling to the ground was the box squat. So I learned to box squat.

As my patellar tendon healed, I started moving the box lower and lower. Eventually I got to where I could squat ATG (ass to grass), but the problem was that I was still using a “sit back” box squat approach to ATG free squatting.

Yeah, it was an ugly mess.

Solution: learn the Olympic style squat. Except I apparently had no available motor program to squat in this upright fashion. Even my front squats were essentially “squat mornings”. Ridiculous.

Fortunately there exists a cue precisely for this dilemma. “Sit down, not back”.

Unfortunately, I could not seem to execute the “sit down” technique.

It sounds silly, but I had lost my ability to load my knee first, probably due to the injury; which though now healed, was still “phantom pain” present on my CNS hard drive. Over the years, I had prioritized the hip break to the extent that the program had become locked.

Nick Horton to the rescue! In this 21-minute bundle of awesome entitled, “How to Squat Like an Olympic Weightlifter”, Nick solved my motor program mystery with this gem: “Put your hip bones right on top of your ankles.”

Alrighty then! That sounded pretty darn doable. Almost immediately, I’m squatting to the floor in an organized fashion. One thing kept nagging at me, though. I’m breaking at the knee first. Now, I’ve been instructed by all of the knowledgeable experts to “break at the hip first”. Conflict. Dilemma. Scary!

Once I really experienced what keeping a more vertical torso feels like (in a nutshell: good!), the choice on which cue to follow was pretty easy. So in my brave new OLY squatting world, even though I am not consciously thinking about it, as I attempt to “put my hip bones on my ankles”, I find that I am breaking at the knees first before loading the hip.

This is what might be referred to as a “load sequencing error”, per mobility expert, Kelly Starrett, possibly Rippetoe would frown on this technique as it takes away an element of “hip drive”. Oh well, this is working pretty well for me. Your mileage may vary, and that goes back to my reservations about tossing cues out like candy to begin with!

And please don’t think I’m dissing Kelly Starrett. The man knows his stuff, and his work has helped me immensely. In fact, he is the co-winner in this category, for this one: “Knees outtie”.

Again, not so much of a cue, as an excellent explanation, and demonstration. (I actually prefer “screw the hip into the socket”, again illustrating my preference for cues that refer to the proximal attachment of the muscle in question. But again, that’s just me!)

Rippetoe’s version, “shove the knees out” also caused me some movement confusion. Again, this just comes down to terminology. I couldn’t figure out how to actively “shove” (use my glutes to concentrically force the knees out) while simultaneously eccentrically lengthening them as I tried to sink into the hole.

It becomes increasingly clear that even the best coaches, those that are completely on top of their game, and on top of the heap, don’t necessarily have one size fits all prescriptions. This is due to the multitude of biomechanical and mental processing differences that we pesky individualistic humans bring to the table.

Honorable mention: “Put a boulder between your legs”, Dan John 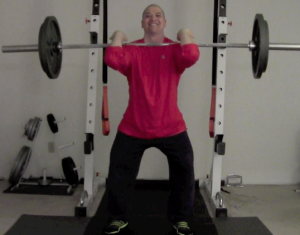 Smile! You just discovered the joys of knee-breaking your front squat!

Our Final Award: Core Stability During SQ’s and DL’s

Remember Point #2, on why coaching cues can suck from above? Boy has this one changed! It used to be: “Arch your lower back…HARD!”

There are many reasons why that cue can be problematic. A quick search on MWOD, or Mike Robertson, or Eric Cressey’s blog will find some informative articles. Here’s my anecdotal experience. When you concentrically crank the low back hard under load, and more importantly over TUT (time under tension), a few not so great things happen:

So that “hard arch” thought process is slowly being replaced with “Control rib flare”, “Control anterior pelvic tilt” or “Connect the ribcage to the pelvis”, or simply, “Keep the spine neutral.”

I personally like “plank the spine”. Another gem: Starrett’s “global whip”. Now, is “global whip” going to mean anything to Joe Bob Dumbbell, or Mary Jane Blaststrap? Not without some indoctrination. Again, it’s a concept. It requires some thought and study, some explanation. And it perfectly lays out the map for core stability.

Finally a word about, “brace your abs”, (I’m not even going to get into that whole TVA “draw in” maneuver). Abdominal bracing is not a bad idea at all. Except when you overfocus on the muscular action, and apply that force concentrically, as I mentioned in point #5 above. One thing you don’t want to do is unintentionally perform an active crunch with a loaded barbell on your back or in your hands. This is when “bracing” goes bad!

Well, folks, this concludes our impromptu cueing awards show. Hopefully, I’ve convinced you that overall, coaching cues are awful, and should never be used!

But seriously, I think that cueing shorthand works way better when you first take the time to learn the longhand. Without a good base of understanding and awareness, a snappy sounding cue can end up being counterproductive.

Finally, I like Bret’s approach of discussing the intended action with his trainee, and asking them how they would describe it. Let them tell you the cue that they can process in their own movement language.

And if that fails, just yell out, “Global Whip!” as they are grinding out a heavy DL!