Today’s blogpost is an interview with Lou Schuler. In case you don’t know, Lou is a damn good writer and a stand-up human being as well. I asked Lou six questions. Below are his responses. 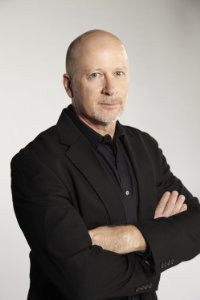 1. Lou, first off I want to say I’ve got a ton of respect for you! When it comes to editors in the Strength & Conditioning field, you’re The Godfather. I also had an incredible time interacting with you at The Fitness Summit two years ago (which is coming up in under a month by the way). How did you stumble into this field, and what books have you worked on?

That Summit was a blast, wasn’t it? They’re all fun, but the one in 2010 was a statistical outlier in the laughs-per-minute category. And of course it was great meeting you.

“Stumble” is a perfect way to describe how I got into writing about fitness. I graduated from journalism school in December 1979, and for several years I had a perfectly conventional feature-writing career at newspapers and magazines. I wrote about all the things you would expect — entertainment, lifestyle, relationships.

Fitness was a trend in the late 1980s, so I wrote about it for a newspaper, and eventually I was able to use those articles to get in the door at Weider. I worked at Muscle & Fitness as a part-time copyeditor in late ’91 and early ’92, and then got a full-time at Men’s Fitness in early ’92.

The first time I worked on a book was at Rodale. It was called Hard Body Plan, and came out in 2001. I was a consultant, more or less. I didn’t do any of the writing or editing.

After that I got a contract to edit a series of books, and that led to the chance to write Testosterone Advantage Plan, which came out in 2002. I wrote and edited a bunch of books after that, including Home Workout Bible and Book of Muscle for Rodale, and then the New Rules of Lifting books, starting in 2006, for Avery, our current publisher.

2. Very interesting! I read an interesting letter the other day from Jack London to an aspiring writer HERE. It’s funny; I believe that I have one of the more popular blogs in the S&C community but it’s not due to my writing skills – it’s most likely due to good content. As a matter of fact, I often make up my own rules when writing. I like to chalk it up to “author’s freedom,” but the truth is that I just never studied writing that often. Do you cringe when you read most S&C writer’s work, and how do you relate to Jack’s advice to the young man in question?

I think London is absolutely right when he describes what it takes to make a living as a writer. The 10,000 Hour Rule didn’t exist in 1914, but what he’s describing sounds pretty close.

The question you have to ask yourself is, “Are my readers more interested in my writing, or the information I present?” Of course you know the answer.

I don’t cringe when I see an honest attempt to communicate. I’ve had people say that they’re afraid to send me emails because they think I’ll make fun of their spelling or grammar. It would never occur to me to do that.

I mean, if a golf pro went to a public driving range, would he stand around making fun of everyone’s swings? He wouldn’t bother. He knows most people aren’t very good at golf. That’s why it’s so hard to become a pro, and why he makes a living at it.

3. Great point. To elaborate, you and Nate Green collaborated in a blogpost a while back titled, “How to Write for a Living.” This was a slap in the face for me. Though I usually proof-read the work I submit to TNation and to journals many times over, I don’t ever take the time to wordsmith and consider all the details like you did in that post. Is poor writing usually just laziness and sloppiness on the part of the author?

So you walk into a gym, and you see a guy trying to teach himself to do an Olympic snatch. The guy understands that he’s doing something wrong, but he can’t figure out what it is. Do you accuse him of being lazy, or do you assume he’s never been coached? 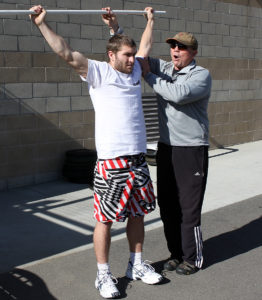 Writing is a technical skill. The mechanics can be taught, if the teacher knows what they are and the student is willing to learn. The whole thing is a process. I compare it to learning a sport. You learn some parts of it on the playground, but the really important parts are what you learn from a coach, usually as part of a team.

4. Okay let’s talk training. The new book you wrote with Alwyn Cosgrove (The New Rules of Lifting for Life) reminded me of my last TNation article (21 Exercises for Injury-Free Mass). We’re all unique, and we all have certain exercises that we tend to avoid and certain exercises that don’t seem to pose a threat. What modifications do you have to make to your own training, being an older lifter?

One thing I loved about your T-nation article was the second or third comment from a reader – something like, “I hope I never get old and have to lift like this.”

I wanted to say, “Dude, getting old and having to lift like this is the best-case scenario! It means you’re still alive, and you’re still in the gym taking care of your body!”

The difference between an article and a book is that we have the space to get into the individual prescription. We don’t just say, “Okay, you’re old, never do a back squat or a barbell bench press.” I can’t do a barbell bench press anymore, or even a dumbbell press on a flat bench, but that doesn’t mean nobody should do it. It just means I can’t.

The goal of NROL for Life is to give readers a menu for each movement pattern. Someone with a bum shoulder may have to stick to pretty basic upper-body exercises, but might be able to go heavy on deadlifts or front squats. We want everyone to be able to enjoy doing what they can, while giving them a plan to avoid the things that make their problems worse.

Another cool feature of the book is that someone without any limitations can do the most advanced exercises for each movement pattern – overhead squats, barbell bench presses, pull-ups, single-leg squats and deadlifts. That lifter gets to pick and choose exercises up and down the menu for each movement pattern to decide what works best in that specific part of the workout. You know, just because you can do an advanced exercise doesn’t mean you should.

Getting back to my own training, I never wanted to believe that age was an impediment. But then I hit 50, and it seemed like everything was breaking down at once. Shoulder. Knee. Hip. Calf. And there’s nothing like a hernia to make you feel like your body is coming apart.

I’ve already mentioned the two big ones I have to avoid: back squats and barbell presses. I tend to avoid exercises that put my lower back in a vulnerable position. I haven’t done barbell bent-over rows in many years. I also can’t do pull-ups – pronated grip – because they kill my shoulders. But I’m fine with chin-ups. 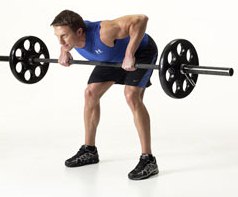 5. Now why didn’t you recommend crunches in the book, didn’t you read my journal article on the topic? How dare you! Just kidding around Lou. One of the many things I like about you is that we can agree to disagree on a topic but it doesn’t affect our friendship. But in all seriousness, what was your rationale for the programming in your new book, and who is the target audience?

The target audience is baby boomers: middle-aged men and women who want to continue lifting but find they need to make modifications to their programs. A secondary audience is people who’re coming back from an injury or illness, or who’re overweight and can’t do certain exercises because of that. A tertiary audience is beginners who’ve avoided training because of real or perceived limitations.

Our books are going to be challenging for everybody. If you’ve never done an Alwyn Cosgrove program, it takes some focus to read the instructions and understand what you’re supposed to do. It’s not Body for Life. It doesn’t all fit on a single piece of paper. Then, once you understand how it works, you still have to do the workouts. And they’re tough! They kick my ass, and if anybody should be ready for them, it’s me.

But if they weren’t tough, we’d be selling our readers short. Nobody gets results without hard work. We’re honest about that. If it were easy, anybody could do it, and everybody would be in great shape.

6.Touché! Thanks for your time Lou! Last question – where can my readers follow you?

Bret, it was my pleasure. I really appreciate the chance to talk about our new book.

I’m easy to find. My website is louschuler.com. I post more on Facebook than anywhere else, where I have a New Rules of Lifting page. I also have a newsletter, which is totally non-spammy. I only send it out when I think I have something interesting or important to say.