The Most Under-Utilized Exercises for Developing Devastating Power

Today I have a guest blog for you by my former intern Joey Percia. I vouch for all of these exercises; they’re my favorite for improving power. Great stuff right here!

Training to maximize power output becomes a very interesting topic when discussed amongst strength coaches. Some coaches swear by Olympic lifts and its variations, while others use a variety of approaches when seeking out maximal power development.

Power is work divided by time ( P = work / time) and is a product of strength and speed. Research has shown that the optimum load for maximizing power production in a particular exercise depends on the movement being performed. Some studies show very little significant difference between loads (the Olympic lifts), while others have a much more obvious load that maximizes power (jump squats).

Someone that tells you that power is only developed at a certain percentage of your 1RM (for example, at 30% of 1RM), no matter what the exercise being performed, is misinformed. Some lifts are maximized at 0% of 1RM (jump squat), others at 30-70% of 1RM (bench throw, bench press, leg press, half squat, split jump squat), and others at 80% of 1RM and above (Olympic lift variations).

Here are some important variables to account for when choosing exercises to develop devastating power.

Choose exercises that coincide with an athlete’s training age — referring to the number of years they have been strength training. Those with a younger training age tend to show greater difficulty properly executing complicated exercises, in which case these should be avoided. Athletes spend a limited amount of time with a strength coach, which is why it is of great importance to perform exercises that will elicit the greatest gains (‘the most bang for your buck’).

Time is precious. It is a waste to prescribe frustrating and difficult tasks to athletes whose time spent with a strength coach is limited and valuable. Choose movements that are significantly easier to learn and perform yet are still highly beneficial.

Monitor the athlete. Make sure form is correct and exercises are being performed safely and effectively. This is critical because the job of a coach depends on the athlete’s safety. Advanced movements and technical lifts which require different equipment and more coaching may not be optimal for settings other than one-on-one and small-group training. There is nothing wrong with performing these lifts if the proper amount of coaching is dedicated to each athlete.

Equipment is not just a common problem in commercial gyms. With larger groups of athletes, equipment can become an issue as well. When choosing an exercise make sure the athlete is able to perform it in the manner in which it was designed to increase maximal power output, specifically in relation to recovery time between sets and the optimal loading being used. It would be foolish to try to manage a group of 15 athletes doing barbell jumps squats with only 2 barbells .

To ensure you choose the most beneficial exercises to improve power in a particular sporting movement or event, look at the movement and ask these simple questions:

Pick exercises that best fit the answers to these questions. When answering these questions appropriately you will see the best carry-over to improving maximal power potential in a particular movement.

You can’t just grab a kettlebell, do half-hearted swings and say you are training power. Well you can, but that doesn’t mean you are going to achieve the desired training adaptations you are seeking.

In this case, violence is acceptable — often encouraged. Perform the movement with ‘controlled chaos’ as I like to call it.

Speed must be maintained throughout the set. If it starts to decrease the set or exercise should be terminated. This is critical. Speed may drop off because the intent has decreased or fatigue has set in because rest in between sets was too short or due to the accumulation of volume.

Make sure you allow adequate rest in between sets to fully recover and keep those bad intentions flowing.

Heavy kettlebell swings have a noticeably different feeling than using a lighter kettlebell. Pilot research shows that heavy swings compared to lighter swings elicit higher glute and hamstring activity. To get the most out of the heavy kettlebell swing for a power exercise, make sure you focus on the ‘hip snap’ by violently contracting the glutes. This makes a huge difference opposed to coasting through the end of the movement, especially when it comes to developing serious power.

When I worked with Bret at the Glute Lab we liked to perform heavy kettlebell swings with the 203lb kettlebell. For males with a 450lb+ deadlift this is a good goal weight. 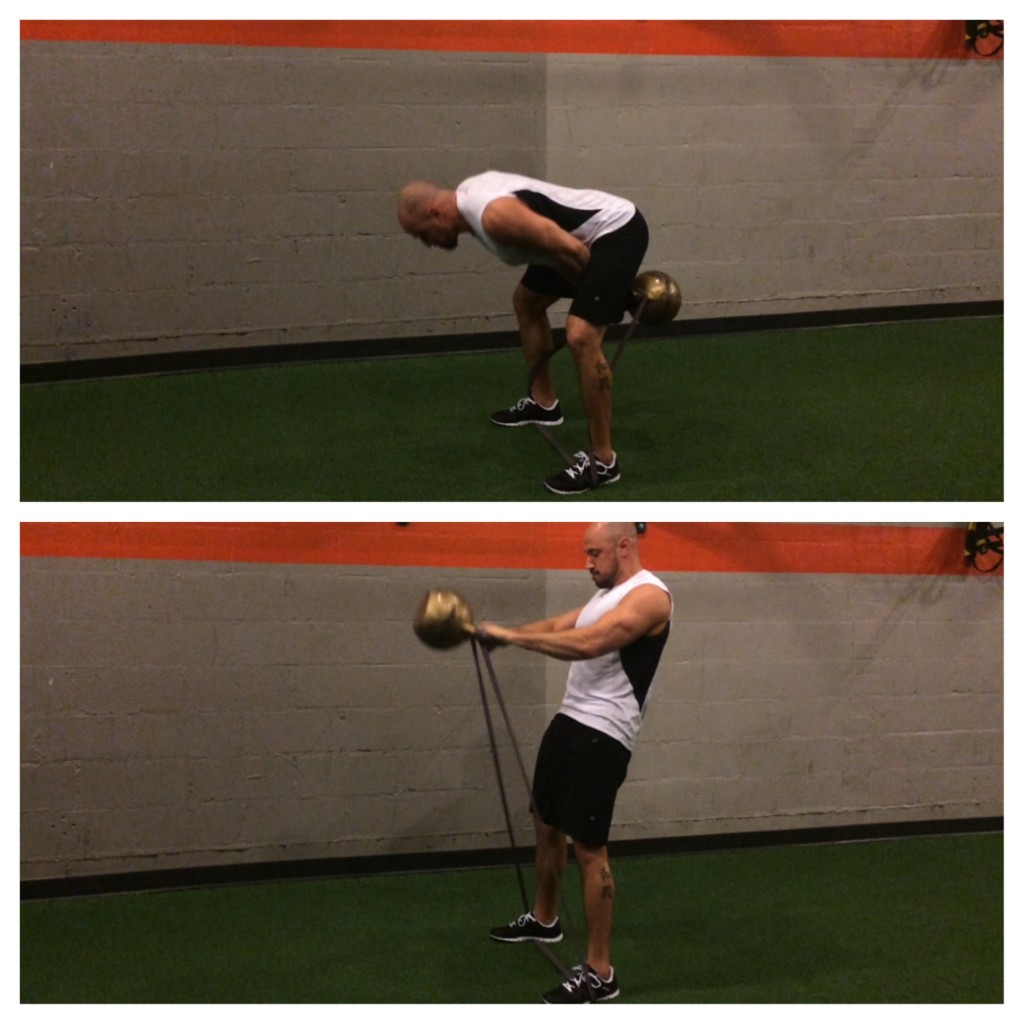 Unfortunately the largest kettlebell I have access to is the 106lb, that is shown. I attach bands to the kettlebell to add resistance. This doesn’t have the exact same feeling of swinging the 203lb’er but it is very similar and teaches a powerful hip extension. I actually prefer the band resisted swing over the heavy kettlebell swing because it is easier for most to control the movement but still must be performed violently because of the added band resistance. 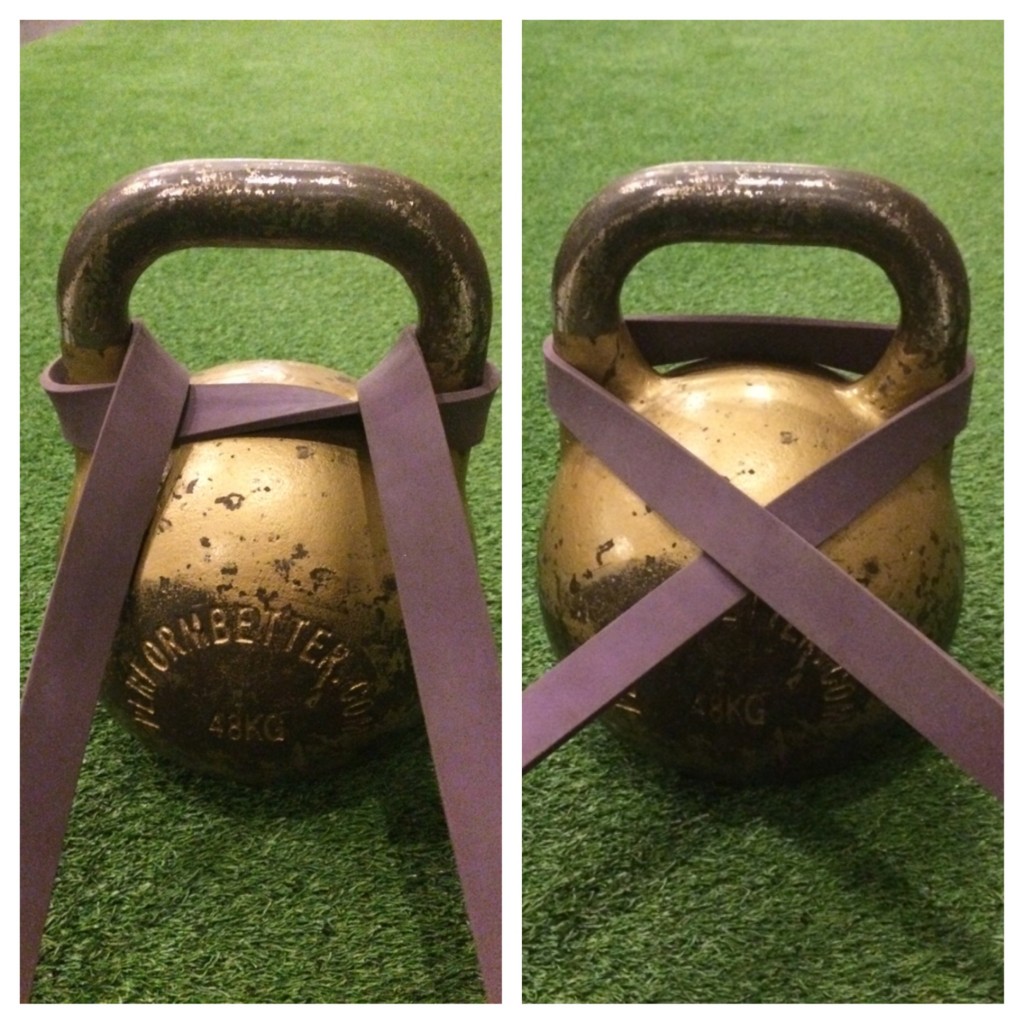 How to set it up (right image first, then left) 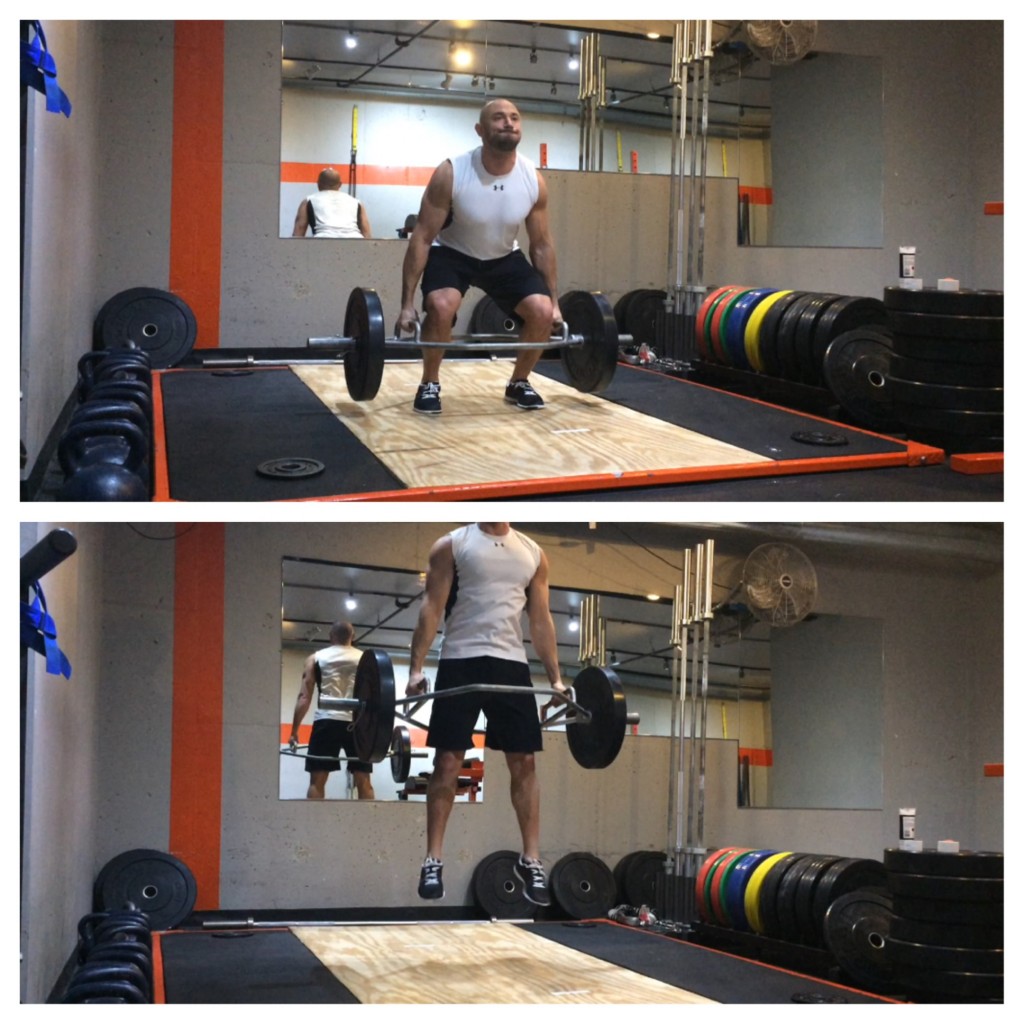 Most feel more comfortable with the weight in the hands as opposed to the weight placed on the back, especially if something ‘doesn’t feel right’. It is easier to let go and release the weight rather than trying to dump the bar off your back.

Jump as high as possible on each rep, absorb the impact during landing, and minimize the time you spend in contact with the ground in between each rep. 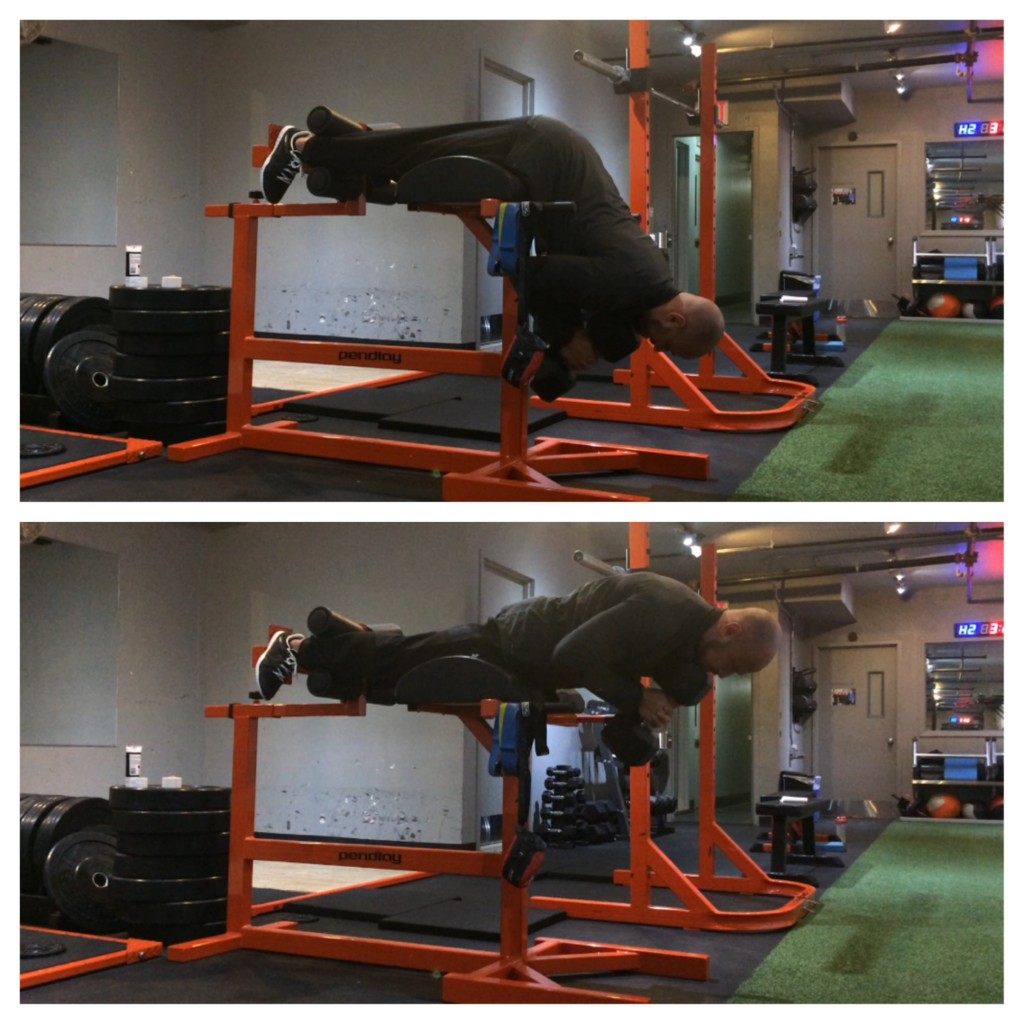 The main focus should be maintaining posterior pelvic tilt, keeping the upper back rounded, driving the hips into the pad as hard as possible and then reversing the movement as quickly as possible.

Prescription: 3-5 sets of eight explosive repetitions with 50% load used for a hard set of 20 reps

Jumping lunges are a great movement to develop power when space and equipment is limited to only bodyweight. The jumping lunge is great because technique can be dialed in to ensure the athlete’s safety. The movement is very easy to learn compared to other single leg plyometrics activities and in most cases very similar to positions found in common field sports. 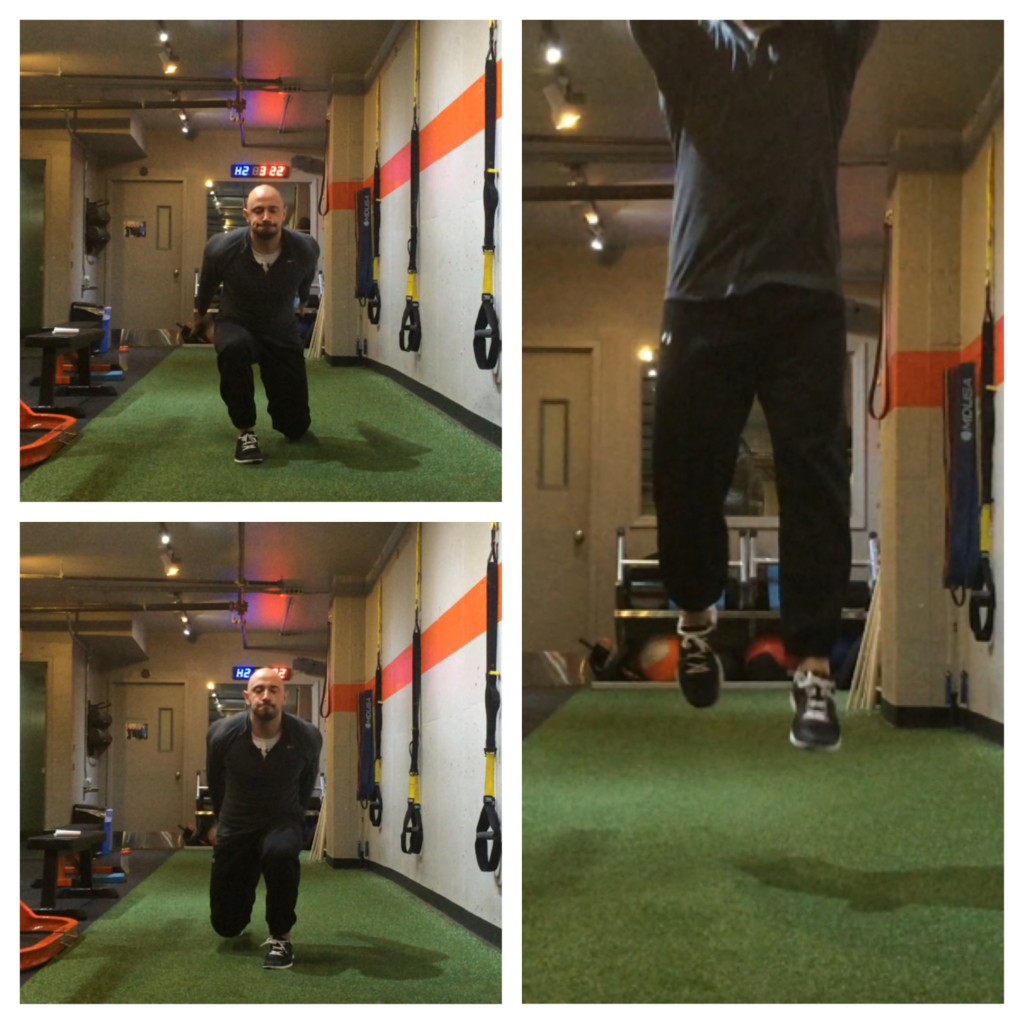 An external load can be used by holding dumbbells or wearing a weight vest if need be. I prefer the weight vest (typically 10-20lbs) compared to dumbbells since the weight vest still allows the use of an arm swing, which is a important component in improving jumping ability.

Prescription: 5-8 sets of 4 repetitions per foot

Sled sprints are an amazing movement to include for the development of tremendous lower body power. The sled allows the athlete to strengthen the sprinting muscles while decreasing the overall loading as well as wear and tear on the joints. 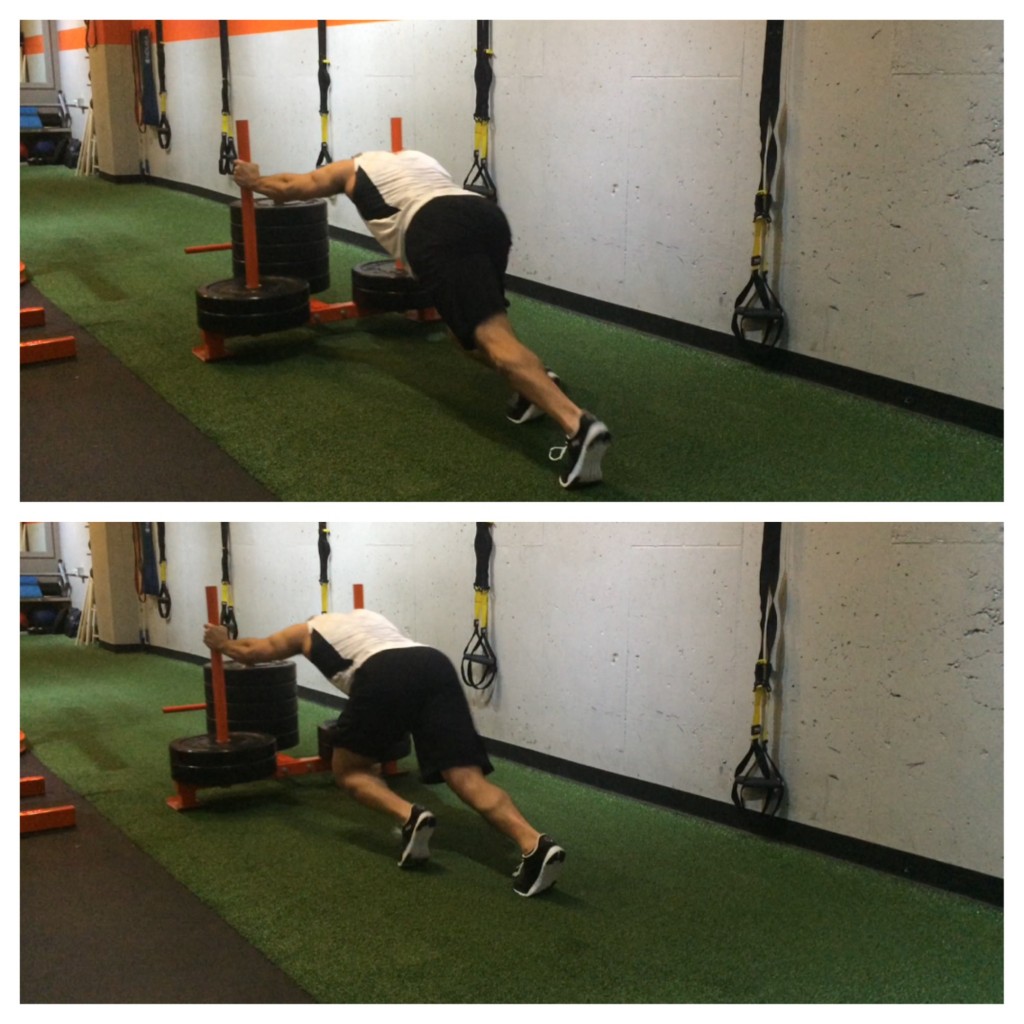 Both must be performed with the intent of moving the sled as fast as humanly possible. The idea behind these two methods is it allows us to train two different parts of the strength continuum. The lighter weights train more speed strength/explosive strength and the heavy weights will train more strength speed/absolute strength.

Putting it all together

When the goal of training is to increase maximal power production it is important to perform these movements in a well-recovered state. This can be accomplished by placing power exercises at the beginning of training or training these movements at a separate time after allowing adequate time for refueling and recovery — For example:

Allow proper time in between sets to ensure full recovery. Training to increase maximal power output is not meant to be performed during a state of fatigue.

Whether you are training for looks, fun or an athletic event it never hurts to be more powerful. Using the movements listed in this article will allow you to train harder while feeling better. Give your body a break and give these joint-friendly power exercises a shot. 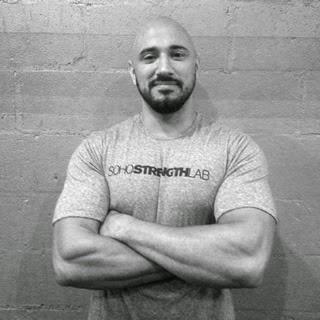 Joey is a strength coach and personal trainer. He is a performance specialist at ‘Soho Strength Lab’, a boutique training studio in New York City and runs an online training business where he helps clients crush their goals. Joey has his Masters degree in Exercise Science and has received his CPPS, CSCS and is Westside Barbell Certified. He is a competitive powerlifter and has been mentored by Louie Simmons at Westside Barbell as well as Bret Contreras at ‘The Glute Lab’.

He provides free content related to all things strength, fitness, health and life on his YouTube Channel ‘Percia Performance‘. Connect with him via Facebook, Instagram, Twitter for a cyber high five. SUBSCRIBE to his free newsletter and receive his 23 page E-book ‘Damage Control for Special Occasions‘ a complete guide for managing fat gain while enjoying special events.